The Palace
Inside the Palace, the Conservation Project operates through interventions on the architectural complex (e.g. the superimposed metallic covers that shield it) and sometimes directly on the walls themselves with non-intrusive, natural materials (such as the application of a reinforcing mud in the fissures).
The procedures followed in the Palace depend mainly on the conditions of the archaeological remains. When no wall is extant, the missing structures have been reconstructed, and marked with a painted hatched pattern to highlight the fact that they are not original. If only the stone foundations of partition walls are still in situ, their outlines are marked with white rods, in order to give back the perception of the ancient volumes, without covering or intervening on the existent ancient remains. Finally, wherever the mudbrick walls are extant, independently of how tall or in which state of conservation, they are protected with localized shelters.

At Urkesh, the concept of shelter has been materialized through the use of single metallic frames, that have the advantage of considering and protecting each wall as a sole unit, and of being easily removable and changeable in toto or only in some of their sections, according to the needs and to the development of the excavations. The grate-like metallic structure is covered by a piece of canvas covered in its turn with a layer of mud: this seems to be the best solution both in terms of efficiency (being natural, the materials allow the transpiration of the mudbricks) and appearance (avoiding unaesthetic, intrusive materials). The sides of the covering structures are made out of tents of a natural, local material: these are arranged in sliding panels attached at the top to the metal frame with curtain rings; therefore, they can then be opened or closed easily using ropes placed at the side.

Thanks to this efficient system of protection, direct interventions on the walls are kept to a minimum, and applied only if the structure is endangered. Should ancient plaster or the external surface of mudbricks become partially detached, a layer of new plaster is applied to the wall, to contain and avoid any loss. If the detachment concerns an entire portion of the wall and its stability is at risk, the bisacce are then used: this term (italian for "saddle bags") refers to elongated sandbags, sewn in loco with a natural material and placed astride at the top of the walls. By virtue of their own weight, they manage to keep together the parts at risk: they have the advantages of being very cheap, they can be produced rapidly and in a high number by the local collaborators, and are non-intrusive.
For the horizontal surfaces within the Palace backfilling is used, i.e. the exposed original floors are re-covered, thus reconstituting in some way the original situation before exposure. Over the backfills some tiles are then placed, both to avoid vegetation and to provide a firm pavement floor. 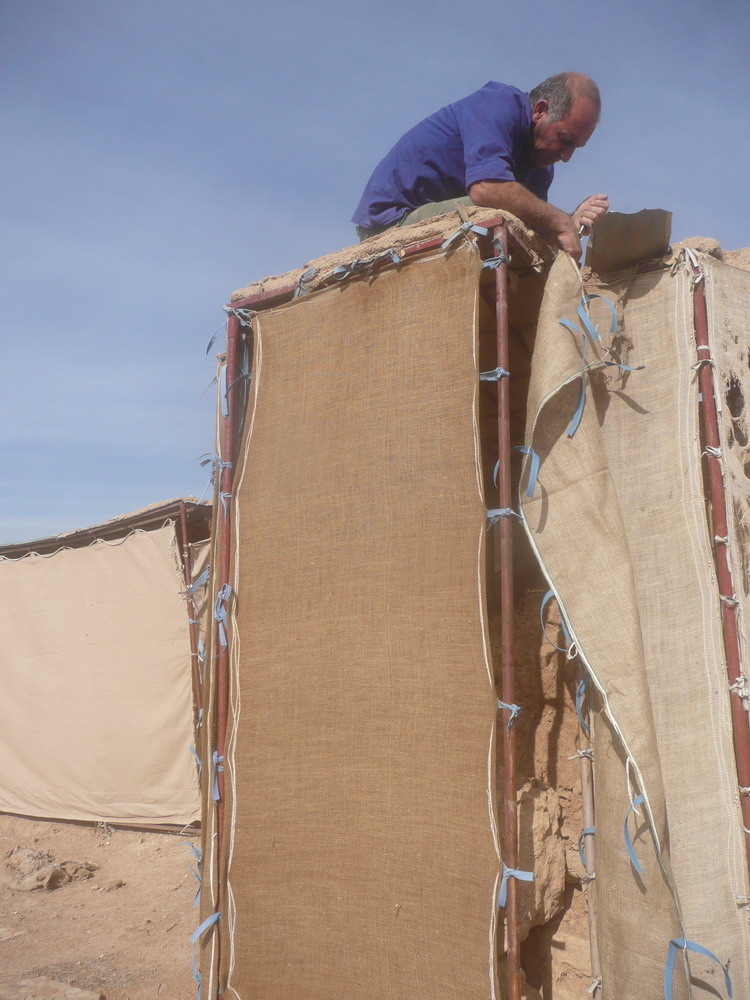 Maintenance and monitoring
Since 2008, some interventions to preserve both the archaeological remains and the whole protecting system are carried out throughout the year, mainly against wild plants and to repair or replace possible broken tents; the local workers also intervene in case of emergencies like unusual weather conditions and collapses of the structures.
Maintenance is in fact a constituent part of the Project: in order to have the situation under control during the whole year, a regular protocol was set up in 2010 that avails itself of the collaboration of different individuals in Syria (both Tell Mozan and Damascus), Italy and the USA.
Since 2002 until today, photos of every wall face in the Palace are also taken systematically. The attention at the beginning was mainly turned to particularly critical situations or walls potentially in danger; year after year, however, the number of the views increased, and the set of photographs includes now all the façades of the Palace.

Most recent conservation work on the site
Here is a list of recent activities carried out at Urkesh under the supervision of Amer Ahmad, to protect its ancient structures both in case of emergency situations and for current maintenance work.
Click on the link to find out more, from our "Events" page.
- September 22, 2020. Mozan/Urkesh Prize for Best Heritage Conservation Paper.
- September 1, 2020. Fire at Mozan.
- June 16, 2020. Heritage Conservation grant from the Kaplan Fund.
- February 13, 2020. Snow on Urkesh.
- September 11, 2019. End of maintenance work in J1 area.
- July 8, 2019. Important maintenance work on the wall of the Temple Terrace.
- January 10, 2019. Heavy rains and sections in front of the Temple Terrace.
- May 10, 2018. Flooding in Mozan.