In collaboration with the General department of antiquities and museums in Damascus, we organized an exhibit on the work of our Urkesh Extended Project.
This exhibit is the Arabic version of the one we held in Rimini meeting in August 2018. The event in Rimini was a success, and we decided that we wanted to bring the exhibit to Damascus, to be inaugurated on the same day of the re-opening of Damascus museum on the 28th of November, after closing for nearly seven years.
The importance of the exhibit derives from the fact that we have been present at the site of Urkesh and the village of Tell Mozan throughout the years of war, and we are present in the re-opening of the museum which is a major sign of the heeling process that has began in Syria. It is also important because it coveys a message of hope and tells the story of the extraordinary courage to stay rooted and preserve the monuments of the past, to ensure a better future.

The exhibit
The exhibit is divided in a special way to take the visitor on a journey. The different section begins with a poem by Syrian poet Adel Mahmoud, which highlights the message we are trying to convey.
The beginning of the exhibit sets the tone of the itinerary. We ask why? Why archaeology in the middle of a vicious war?
We, as archeologists, are provoked by many factors. One of the most recent and unexpected provocations has been the long war that has raged in Syria. But all along we have been provoked by weather elements, which we have been fighting against from the beginning of the excavations.

This leads to the second section of the exhibit, which deals with the conservation and maintenance operations that are performed on the site on a daily basis, showcasing the major maintenance operation of the Abi (the entrance to the netherworld).
The third section completes the second one. Our efforts in conservation would have been incomplete if no interpretation is offered. The photos of the international and local tourists visiting the site is the culmination of our conservation and site presentation efforts. 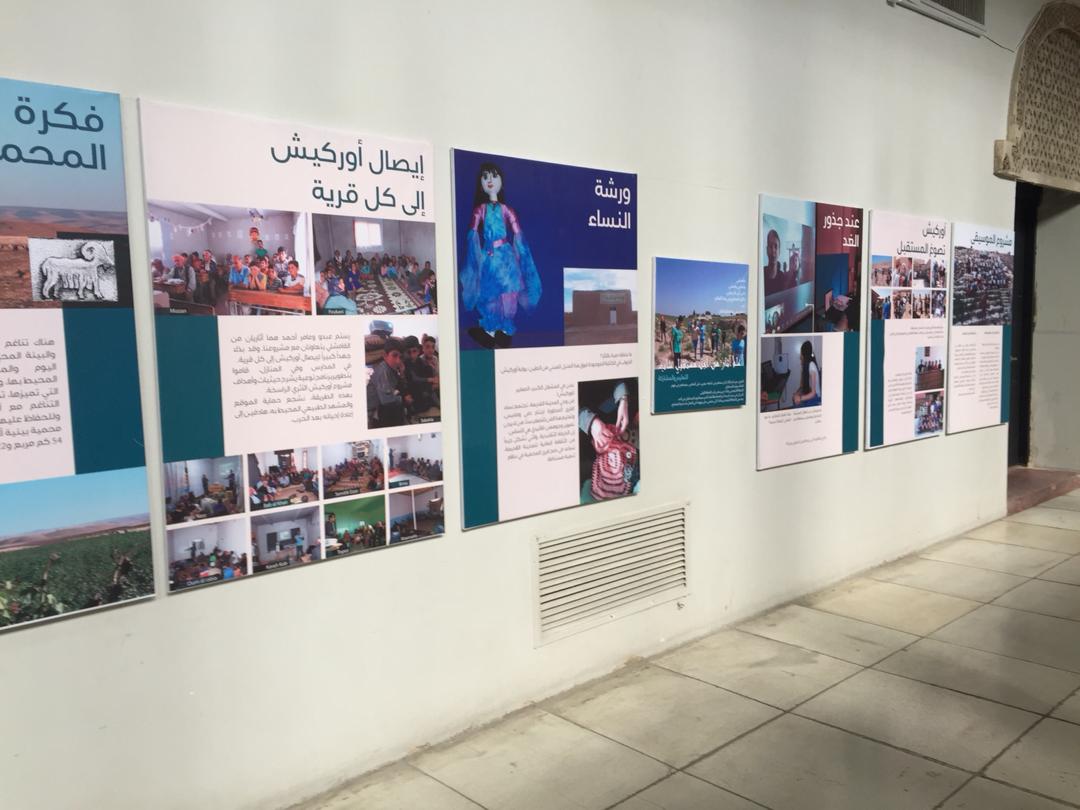 So far, the exhibit demonstrates aspects of our work, more related to archaeology and conservation, but we are working for the larger scope of the discipline which is demonstrated in our various projects with the local community, aiming towards sustainable development on the cultural and economic level. The fourth section of the exhibit describes the idea of the eco-archaeological park, and the tow components which were realized during the years of war.

1. The awareness campaigns, where two of our local collaborators visited the 22 villages of the park and gave presentations about the archaeological site, and the importance of preserving it and the natural landscape around it.
2. The handcraft atelier of the women, who are producing handmade traditional items. 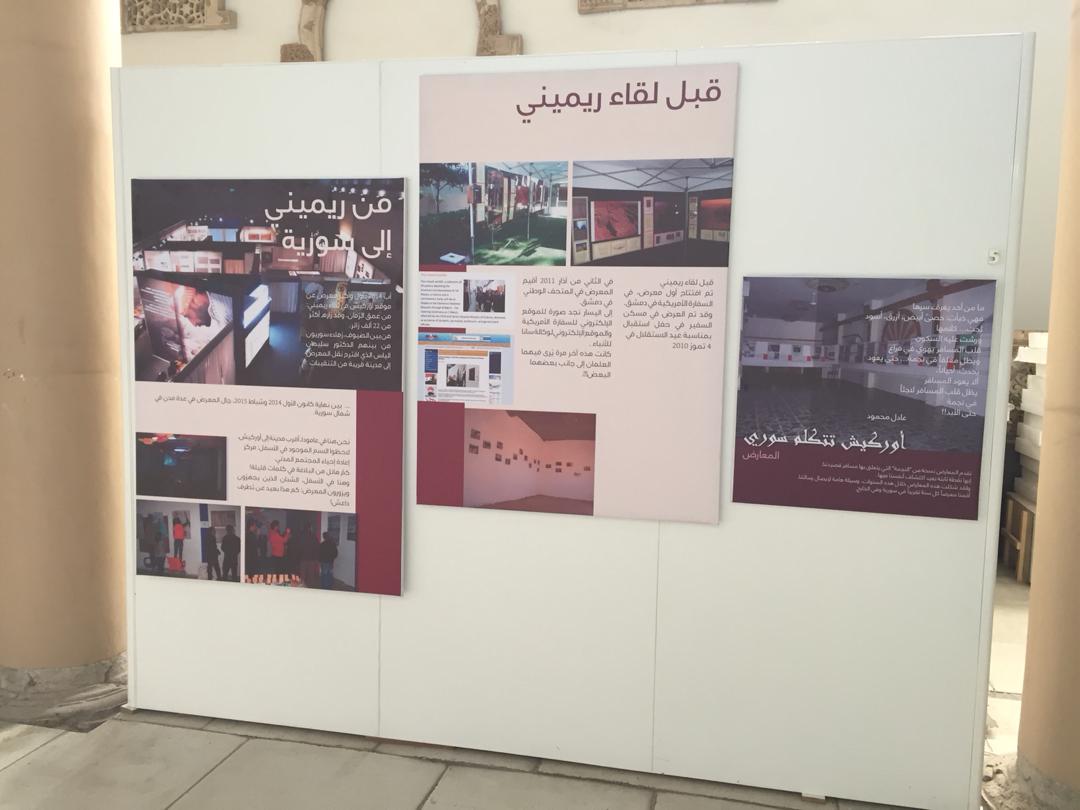 The fifth section is of an interesting nature, because we took this opportunity to exhibit our exhibits! These exhibits, in Europe and in various Syrian cities, allow us to diffuse our work to a larger audience, which not only sets an example of how to manage an archaeological site in a time of crisis, but also reflects a beautiful images of the area and its local inhabitants.


We reach the end of our exhibit itinerary with the last section, which conveys a message of hope. This section narrates the stories of the various projects we have with the young generation, carriers of hope, and tools of positive change. On one hand, Urkesh managed to serve as an educational instrument for young archaeology student, offering its well preserved monument for studying and learning topographical techniques, and on the other hand, it brought tow completely different groups of children from tow completely different parts of the world, together, as they reflected together on the value of the past, the roots, and the meaning of home. This twinning of two middle schools, one in Qamishli, Syria, and the other one in Domodossola, Italy, showed another common denominator amongst the children, which is music. The musical suite inspired by Urkesh and composed by the Italian students, provoked the Syrian students to take out their musical instruments, and perform their music on the monumental staircase of Urkesh. This is truly the power of archaeology, and the power of one archaeological site, when managed properly, it unites people and transcends social and political barriers.

The catalogue
To accompany the exhibit in Damascus, the Italian version of the Rimini meeting catalogue was translated into Arabic, and printed in Damascus (click here for a digital edition in .pdf format).
The remarkable thing about this effort, is that it was all done in 15 days, from translation to graphic editing to printing, and this is all thanks to the collaboration of various people, in order to meet the deadline.
The catalogue is the detailed version of the exhibit, as it narrates with details, the story of our work during the past 7 years in Tell Mozan. It also contains testimonies from staff members, our local collaborators, and friend of the project who contribute to our project with their thoughts and moral support.
In a way, this catalogue resembles Syria: Different people, different cultures and backgrounds, but the result is a coherent beautiful whole.

Opening Day
The opening day of the national museum was attended by officials in the Syrian government, and diplomatic representatives of countries that still have diplomatic relations with Syria, in addition to world renowned archaeologists from all over the world, who worked in Syria.
The event was also attended by many people who were enthusiastic about the reopening of the museum.
The event was inaugurated by the minister of culture.

Feedback
We always get positive feedback, especially from the employees of the department and museum who constantly tell us that the visitors are very impressed with the exhibit, and they wish to learn more.
Initially we planned to have the exhibit on display for 3 weeks, but we kept it on display for longer (it is now still on display) upon the request of the general department of antiquities.